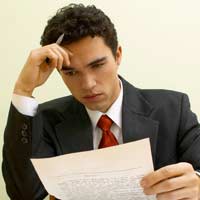 No matter that you've addressed a letter correctly or even if the content is important, interesting or entertaining - all your efforts could be disregarded to one extent or another if the content is filled with poor examples of spelling, grammar and punctuation. Quite often, this can come about as a result of carelessness, i.e. not checking your letter and reading through it once or twice after you've completed it in order to look for grammatical errors and/or spelling mistakes.

In some instances, grammar, spelling and punctuation might not matter too much if it's an informal letter to a family member or friend but it can be looked upon more harshly in other situations, for example, when applying for a job. If an employer or HR manager opens your application and comes across numerous grammatical errors, they might,

b) think that if you've not taken care to check your letter thoroughly, then you might also adopt a similar casual attitude in the workplace.

Checking, Double-Checking and Getting Someone Else to Check

Either way, and with usually so many applications to sift through, your letter and application is likely to hit the bin before the first few lines have even been read so it's well worth spending time checking it over for errors, once you feel you have said all you want to say. It could make all the difference and even those with a high command of English are prone to overlook mistakes occasionally so it's useful to check and double check your letter before sending it. Quite often, it's useful to hand over your draft to someone else to read first as they might see an error which you've overlooked yourself.

Checking by Computer is no Guarantee

If you use a computer to write your letter, there will usually be a spelling and grammar checker in the tools section of your word processing program. These are quite useful, especially if your spelling isn't great in particular, but they aren't infallible. For example, sometimes you might have spelt a word correctly but it might not make sense within the context of the sentence. An example would be:

"I brought the product from your store yesterday but it wasn't worming when I got it home".

Does this make sense to you? Well, in terms of the spelling, it's all correct and a spell checker wouldn't flag up any mistakes. However, it may be confusing to a shopkeeper if you meant to write the following:

"I bought the product from your store yesterday but it wasn't working when I got it home."

Computers can't be relied upon to spot all grammatical and punctuation errors either.

Bad Examples of the English Language

Other examples of bad punctuation and grammar include using commas where there should be full stops and vice versa. Incorrect usage of apostrophes is another common error. Using 'you're' instead of 'your' and vice versa is another prime example.

If your spelling, grammar and punctuation aren't perfect, you're not alone. However, try and show the letter to somebody who's more proficient in these areas before sending it. There's nothing worse than receiving a well thought out letter in terms of content, being ruined by a poor command of the English language and it can make all the difference as to how both the letter and you, yourself, might be perceived.